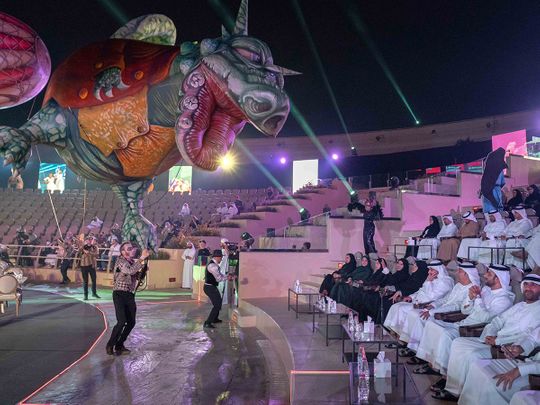 Sharjah: Shows and stunts were among the various attractions that kicked off the very first â€œSharjah Festival of Eventsâ€ on Friday at Al Majaz Amphitheater.

The two-day festival features 25 public and private entities in Sharjah organizing various activities while revealing their event lineup for 2022.

The free event was opened by Sheikh Sultan bin Ahmed Al Qasimi, Deputy Governor of Sharjah and Chairman of the Sharjah Media Council. The free festival is organized by Sharjah Events – an initiative of the Sharjah Government Media Bureau (SGMB) under the slogan “#SeeSharjah”.

Sheikh Sultan said that the increase in the number of visitors to all of the emirate’s activities is a reflection of the diversity of its sectors, including culture, arts, sports and entertainment. During the inauguration, Sheikh Sultan launched the official calendar of events for 2022, which includes the detailed list of activities organized by the entire government of Sharjah and private entities over the coming year in various sectors, in particular culture, economy, science, heritage, sports, the arts. , and entertainment

In her opening speech, SGMB Director Alia Al Suwaidi said: â€œSharjah Events was launched with the aim of highlighting the emirate’s events and activities on a comprehensive platform, in partnership with public and private entities in Sharjah. “

She added: â€œThe Sharjah Events Festival is one of the initiatives of Sharjah Events which brings together more than 25 public and private entities in a spirit of unity to celebrate the achievements of the emirate in a family and fun atmosphere and to inaugurate the new year with a rich and diverse program of events that will appeal to audiences of all ages.

The ceremony was marked by fireworks, performing arts and entertainment shows.

Other activities include traveling parades, stuntmen and a scavenger hunt. Hands-on interactive workshops on art and other topics are also available, along with poetry sessions, live cooking demonstrations, craft shows, and free health checks, among others.