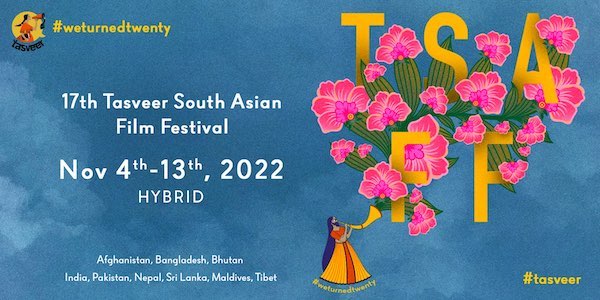 Tasveer South Asian Film Festival (TSAFF) is the largest South Asian film festival in the United States, located in beautiful Seattle, Pacific Northwest, Washington. It is produced by the powerful non-profit arts organization, Tasveer, which serves as a platform for all things film, literature and art, as part of the South Asian experience.

We catch up with the momentum Rita Meherco-founder and executive director of Tasveer, for a conversation about Tasveer and what to expect at TSAFF, scheduled for November this year.

The Tasveer South Asian Film Festival (TSAFF) has received international acclaim for the quality and excellence of the films presented, as well as for the dialogue they foster across and beyond the southern community. -Asian. What does the TSAFF have in store this year?

TSAFF 2022 will continue to deliver diverse South Asian experiences through exceptional films drawn from a multitude of languages, cultures and geographies. As Mira Nair, director and Tasveer alumnus so succinctly put it, “Nothing is more powerful than seeing your own language, your own colors, your own people and your own dramas on screen.”

Submissions are now open for TSAFF which will take place during a 10-day extravaganza from November 3-13, 2022. It will showcase the best of South Asian cinema, literature and storytelling in a hybrid festival. As always, Tasveer will amplify underrepresented South Asian voices, spotlight South Asian artists, and create a safe space for dialogues within our communities.

Through a series of film screenings, panel discussions, workshops and cultural programs, our goal is to engage the public not only with the film and video works presented, but to create an extended space where social issues, political, personal and international that form the central subjects of this work can be discussed and understood.

We believe film can be a powerful way to bring ideas and communities together and create deeper understanding through stories, to foster a happier, healthier world.

Is there a particular focus on a type of film or a theme that you are looking to present at the festival this year? From which countries do you accept submissions?

While we include a variety of well-told, unusual South Asian stories, we are particularly interested in films about representation, equity, climate change, LGBTQ issues and women’s rights. This year, our festival symposium will be organized around the theme of Kashmir, with artists, scholars and activists exploring social justice issues in the region.

Tasveer as an organization is now in its 20se year, and over time has become one of the most important platforms for South Asian voices. How it all began ?

Shortly after the September 11 attacks in the United States, there was an increase in hate crimes against South Asians. At the time, Farah Nousheen and Rita Meher were troubled by the stereotypical portrayal of South Asians in mainstream media.

Together they decided to play a part in changing this myopic and damaging narrative and in March 2002 created Tasveer, a platform that would offer a broader perspective of South Asian life through art, cinema and storytelling.

Over the years, Tasveer has evolved into one of the largest platforms for a multitude of diverse voices inspiring social change. To illustrate, two years ago, the COVID-19 pandemic exerted unprecedented pressure on the world and the artistic community. In response to the crisis, Tasveer led the Coalition of South Asian Film Festivals (CoSAFF). CoSAFF was a one-of-a-kind event that brought together seven well-established South Asian institutions from across North America.

The virtual festival ran for 15 days, featuring online screenings of thought-provoking films and forums on South Asia and its diaspora, to engage viewers in dialogue on issues of human rights, social justice /politics/economics and representation, garnering around 45,000 views.

Today, we are grateful for the movement that Tasveer has become, the support we receive from filmmakers and audiences across the United States and abroad, and sponsors and partners such as DuBois Cary Law Group and BECU.

Are there any other initiatives going on at Tasveer right now, and what are some of your ongoing programs?

In addition to inviting applications for TSAFF, Tasveer has also opened applications for its third annual Tasveer Film Fund (TFF) program which will now include two tracks: one for short films and one for feature films. The TFF enables South Asian filmmakers to bring unique, untold stories to life through production grants, as well as year-round support, resources and mentorship.

With support from Netflix and as part of its Fund for Creative Equity initiative, the Tasveer Film Fund Shorts Films track will increase support for South Asian filmmakers developing short film projects, and up to $35,000 will be awarded in grants : Documentary Projects ($15,000), Short Storytelling ($10,000) and LGBTQI+ Short Storytelling ($10,000).

For the first year, Tasveer will offer a feature film track with funding of $15,000, available to South Asian filmmakers worldwide.

Some of our other initiatives are The community speaks, South Asian Tasveer LitFest, Tasveer Open Mic, Tasveer Youth Collective and TasveerTV.

What are other ways for people to get involved in TSAFF?

We have been fortunate to have many passionate changemakers joining us as volunteers. They often assist with the programming of our film and literary content, participate in in-person and virtual events, take care of administrative and IT tasks, and participate in fundraising and awareness activities.

We also provide a fantastic platform for sponsors, many of whom have been with us for years and their support has made many of our programs and initiatives possible. Interested sponsors can find out more here: https://tasveerfestival.org/sponsor/

Full details on how to get involved with TSAFF can be found at https://tasveerfestival.org/