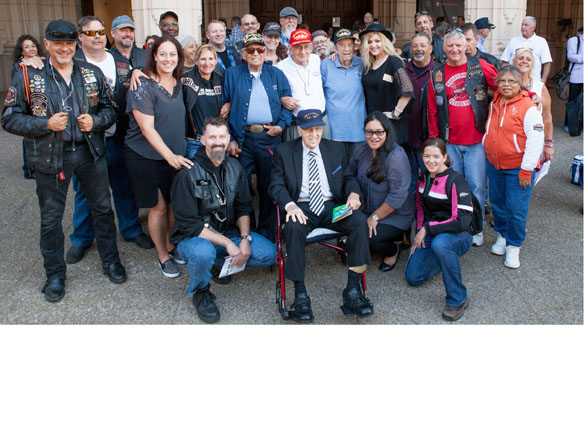 Film Consortium San Diego welcomes applications from students and professional filmmakers by May 15, 2017. Selected films will be screened at the only San Diego festival dedicated exclusively to military films. Submissions are now being accepted for the local film showcase at the GI Film Festival San Diego. The San Diego Military Film Festival, now in its third year, will take place at various locations across San Diego County from October 18-22, 2017. It is one of the few film festivals on the theme military products in the United States.

Film Consortium San Diego welcomes applications from students and professional filmmakers by May 15, 2017. Selected films will be screened at the only San Diego festival dedicated exclusively to military films. Submissions are now being accepted for the local film showcase at the GI Film Festival San Diego. The San Diego Military Film Festival, now in its third year, will take place at various locations across San Diego County from October 18-22, 2017. It is one of the few film festivals on the theme military products in the United States.

Local veterans and active-duty military personnel are welcome to submit nominations on any subject. Local student and professional filmmakers with no military background are welcome to submit films with a military theme. All filmmakers (national or international) are welcome to submit a film on a military subject based in San Diego County or Imperial County. Just as the military is made up of various veterans and active duty, festival organizers hope to see submissions that reflect a wide range of military experiences, including stories of people of ethnicities, races, genders, from different economic backgrounds as well as individuals who identify as LGBTQIA +. These perspectives are often under-represented but play an important role in American military history and culture.

Submissions for the GI Film Festival San Diego Local Film Showcase must meet at least one of the following criteria:

A storyline or story arc that deals with military experience in San Diego County or Imperial County.

A military-themed film starring over 60% of the cast and crew from San Diego County or Imperial County.

A military-themed film that was shot or edited in San Diego County or Imperial County.

A film of any genre or subject made by a local filmmaker who is currently serving or has served in the United States military. The local filmmaker must reside in San Diego County or Imperial County.

Applications are considered for the following categories:

All submissions must have been completed and posted after January 1, 2011. Submissions that meet the technical requirements will be reviewed by an advisory committee, composed of members of the San Diego military and veteran community or representatives of San Diego organizations. who serve military members, families and veterans. The committee evaluates nominations for thematic and production values, then makes recommendations on selections to show in the local film showcase at GI Film Festival San Diego 2017. These films will also be considered for the festival’s awards program during the closing celebration. To be considered for the Local Choice Award, the film must have at least 60 percent of the cast, crew, and locations from San Diego County or Imperial County. The competition is open to US and international entries.

The early submission deadline is April 10, 2017. The general deadline is May 15, 2017. Registration fees start at $ 35 with discounts for serving and former military, current students and members of the Film Consortium San Diego Plus.

Filmmakers interested in participating in the festival’s local film showcase can view the requirements and categories on the GI Film Festival San Diego website: www.GIFilmFestivalSD.org

Established in 2015, the GI Film Festival San Diego aims to reveal struggles, triumphs and experiences through compelling and authentic storytelling. All major film genres will be shown, including documentaries, short films and personal stories. The festival is organized by KPBS in partnership with the GI Film Group and the Film Consortium San Diego. Official sponsors of the 2017 San Diego GI Film Festival include GEICO Military, Bob Baker Subaru, and Scatena Daniels Communications. Alaska Airlines is the official sponsor of the trip.

Highlights of the 2016 San Diego Military Film Festival included the West Coast premiere of ‘USS Indianapolis: The Legacy’, a family movie night, filmmaker talks, panel discussions and the awards ceremony. from the Local Film Showcase. The 2016 winners are:

Best Documentary Short – â€œAmerican Arbitratorâ€ – Of all military personnel around the world who are stationed outside their home country, 95% are US citizens. Their work is difficult, unpredictable and often thankless. Statistics have been this way for the latter half of the 20th century. â€œAmerican Umpireâ€ explores how the United States took on this role in the first place, interviewing various experts in the field about their impact on the economy and foreign defense. The film opens a national discussion on US foreign policy to potentially redefine our national vision. Director James Shelley accepted the award along with his wife and “American Arbiter” producer and screenwriter Elizabeth Cobbs. Shelley and Cobbs are residents of Mount Helix. Shelley is pursuing her Masters of Fine Arts at San Diego State University.

Best Short Narrative – “The Light Once Captured” – A young man looks at old cameras at a garage sale. He thinks the camera that saw the war looks cool, until he gets a glimpse of the past. Director Ryan Kelly accepted the award and is a San Diego filmmaker and United States Navy veteran. Kelly, currently a resident of Ocean Beach, started making short films four years ago. â€œThe Light Once Capturedâ€ is one of his first films. Since then he has directed and made cinematography on several others. Kelly won the 2015 San Diego Film Award for Cinematography for her work on the short film “The Reunion”, which was also screened at the 2015 GI Film Festival in San Diego.

Best Feature Documentary, Local Choice Award, and People’s Choice Award – “USS Indianapolis: The Legacy” – This gripping tale of the fate of the WWII heavy cruiser USS Indianapolis uses exclusively the first-person accounts of 107 survivors of the World War II. devastating torpedo attack. The film took 10 years to produce, including 207 full-time days to edit and finalize the documentary. Local filmmakers Sara Vladic and Melanie Capacia Johnson attended sold-out screenings of the film on September 14, 2016 for the festival’s opening night and the encore screening on September 18, 2016. Vladic is a resident of San Marcos and Johnson is a resident of Oceanside. USS Indianapolis survivors also attended the festival and spoke to attendees about their experiences. Sara and Melanie accepted all three awards at the closing celebration and dedicated them not only to the survivors in attendance, but to all of the crew, lost and found, of the USS Indianapolis. Survivors at the 2016 closing celebration received a standing ovation for their heroic service. The film debuted at the 2016 GI Film Festival in the DC area, where Vladic received the award for Best Director.

Best Student Film – “Love is No News” – This short film tells the story of a man who owns a newsstand in the middle of a downtown business district. Among the clients is an amazing woman whom he would never imagine to notice, let alone have a romantic interest. But she is indeed attracted by her quirky charm. Director David Oleary accepted the award. Oleary is a North Park resident and is pursuing his MFA in Film Production at San Diego State University. Oleary served seven years in the US Air Force as a communications officer. He then went on to own and chair numerous companies with full responsibility for all facets of staffing, marketing, financing, production and product delivery in various industries including video production. .

This summer, festival organizers will announce the 2017 festival program, ticket prices and venues. Many events will be open to the public with special discounted opportunities for active duty personnel and veterans. Additional information is available at GIFilmFestivalSD.org.

The GI Film Group is a full-service media company dedicated to preserving the stories of military veterans. GIFG is the production entity behind the award-winning GI Film Festival (GIFF), a 501c (3), also known as “Sundance for the Troops,” held annually in May in Washington, DC. The festival is the first in the country to exclusively celebrate the successes and sacrifices of the military through film.