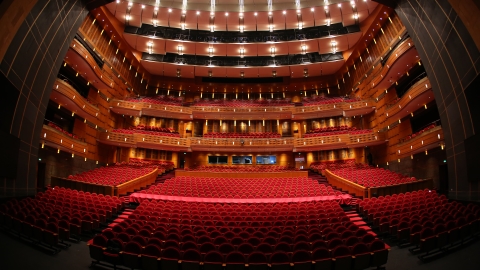 Risks of infection put theaters and cultural venues on alert

Some cultural venues, including theaters and cinemas in Shanghai, have stepped up pandemic control and prevention measures from Sunday.

People who attend a film screening or cultural performance in the city must now present a negative nucleic acid test result within 48 hours. Proof of 24-hour testing or an on-site antigen self-test is invalid.

Cultural venues and cinemas, including the Shanghai Grand Theatre, Shanghai Concert Hall, Majestic Theatre, Suning Cinema and Jinyi Cinema, have already posted the notice of the new audience requirements on their websites and their WeChat accounts.

Before entering the halls, the public must scan the hall code and have their temperature checked.

It is forbidden to eat and drink inside the theaters. Theater workers will also patrol during screenings and remind people to wear masks.

Jin Renbiao, an official at the Shanghai Grand Theater, said it would keep its maximum capacity for each performance at around 50 percent to ensure a safe distance for spectators.

Previously, the city required a negative 72-hour PCR report to enter cultural venues in line with other public spaces. The stricter regulations are to deal with increased infection risks during the Mid-Autumn Festival holiday, which falls on Saturday.

Shanghai found no new community COVID-19 infections on Saturday. But during the central quarantine, one confirmed patient and seven local asymptomatic infections were reported, and a residential area in Jing’an district was listed as a medium-risk area.

The Misleór Festival announces a dynamic program of events