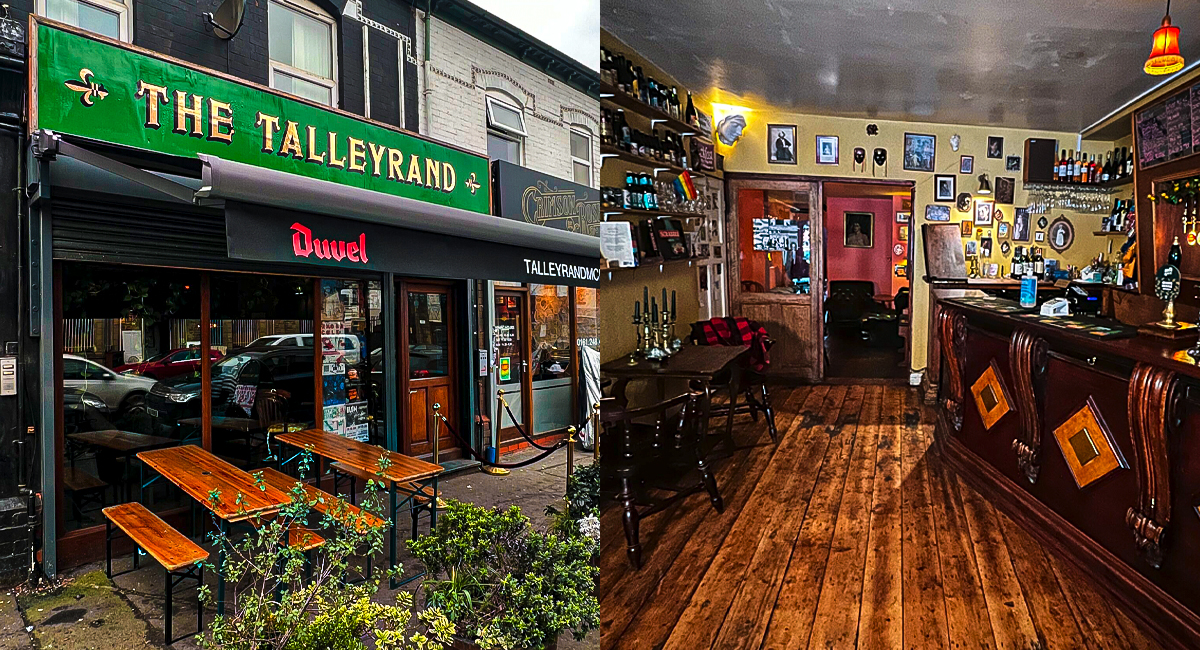 Drawing inspiration from the dimly lit boozers of Amsterdam and Berlin, The Talleyrand exudes a sense of playfulness that automatically made me feel at home.

Stepping through the dark oak front door of The Talleyrand for the first time, I almost confused it with an antique village, or the main room of a mansion where balls used to be held.

His interior by candlelight is covered with archaic paintings lords, accompanied by crucifixes and vintage lamps, making you want to sip sherry from crystal flutes and skin a few pigs in the back.

Slap bang in the middle of Stockport Road, bar and event space are part of the ever-expanding creative hub of Levenshulme.

To say it is gentrifying like other city suburbs is wrong, as Levenshulme clings to its character unhesitatingly and disconnects from its past. He really celebrates it, just like Le Talleyrand. You just need to dig a little deeper into the name to find out how.

“We wanted the place to connect to its region, instead of being a hip spaceship that had just landed, so we named it after a French diplomat, Charles Maurice de Talleyrandsaid Tom Hughes, one half of the pub-owning duo.

“He was a very cunning politician who worked alongside Napoleon, but he had to flee France during the French Revolution and ended up here in what we now know as Levenshulme. It then became the name of the region in the years following his departure.

The place belongs to Tom, alongside his good friend, Dean Brocklehurst whom he first met when the couple were working together at HOME.

Tom and Dean both having a background in production and screenplay, as well as music venues, they recognized that they had a very similar work ethic and were keen to bring more musical, cultural and artistic events to areas outside of the city center.

“I think our advantage is that we have full control of our events and rosters, and we can also serve a good pint, too much.

“There are plenty of places around the city that have concerts and arts events but serve cheap pints of beer. We have a huge range of craft beers which we change every week and I think that is one of the things that draws people to our site,” Dean continued.

The Talleyrand’s eclectic events program is also very carefully curated, avoiding your Elvis tribute acts or the Oasis cover bands we tend to expect from smaller venues outside the city centre.

Since its inception, the pub has hosted a solid lineup of what Tom calls “BBC 6 music act”, as well as local artists doing something a little different.

There’s nowhere else in the suburbs that you’ll see a bunch of shirtless guys bang your head for whisper bass guitars, then the following evening a piano-led jazz band, perfectly balanced in black tie tuxedos.

A big highlight was Laetitia Sadier from Stereolab, who gave an extraordinary stripped down acoustic performance in the pub, and their monthly Jazz Levenshulme night, which attracts incredible jazz musicians from all over the city.

Tom and Dean are also looking forward to celebrating Independent Music Venues Week next week with a schedule packed with diverse performances from the local melodic post-punk quartet, Bulk Items at a screening of IDLES brand new documentary, who is a fly on the wall looks at the life behind London’s most poetic punks.

The Talleyrands’ future plans center on an ongoing effort to bring various events to residents of Levenshulme and further afield, with Tom and Dean hinting that a new venue could also be on the horizon for the duo.

“Obviously post COVID we’ve only just been able to get back to booking numbers and restructuring our schedule so right now we’re focused on that and also choosing our beers and making the exciting venue. It’s great to have the freedom to do it again,” said Tom.

“We would also like to branch out and open a new venue a bit further out of town, which is very exciting, but who knows what might happen this year! For now, our focus is on the Talleyrand and making sure we have the right team and resources in place to run the events we have planned over the next few months.

Here is a list of unmissable events at Le Talleyrand that you need to register as soon as possible!

Bulk Items + Duvet + Oorya
Saturday February 5
Celebrate Freelance Sites Week and raise funds for Manchester Women’s Aid, Le Talleyrand is organizing an evening of frolics on the female front of Bulk Items, Comforter and Oorya (pronounce WHO ARE YOU?!). The evening promises to be a mix of melodic shoegaze, rowdy post-punk and queer electro punk-folk!

Third Pier Theater presents OLD BONES
From Wednesday 23 February to Friday 25 February
The first production of Third Pier Theater returns to rave reviews from Fringe of Prague and Buxton Fringe. Meet James Napier, a drinker, gambler and lothario, desperate to free himself from the consequences of a gamble gone horribly wrong. Over four hundred years ago, James Napier made a terrible mistake, and he’s been trying to fix it ever since. Hear the stories of a gambler and an adventurer looking for someone who can beat him in a game of chance. Do you dare to challenge the immortal man? !

Girls in synthesis
Saturday February 26
Established in 2016, Girls in synthesis are a post punk collaboration with a DIY ethic. Full of raw, authentic and infectious energy, the band have been voted one of the UK’s most intense and unique bands. Last single pulling teeth builds up on vibrant synths and viciously direct vocals, and it’s also reflected in the band’s live performances. Expect the instruments to be removed from the stage, completely breaking the audience/performer barrier!

John Otway
Thursday March 3
John Otway is an English singer-songwriter who has built a significant cult following through extensive touring, a surreal sense of humor and a self-deprecating underdog persona. Known for his frantic live shows, his willfully amateurish approach caught the attention of a slew of celebrities at the time, including Paul McCartney, because Otway has already been invited to support Wings! It’s going to be a good one, and it’s definitely about to sell out, so be sure to grab your tickets quickly.

TV Smith + special guests
Friday May 20
TV blacksmith was a founding member, singer and songwriter of Advertisement, who formed in late 1976 and became one of the leading bands of the first wave of British punk rock. In early 1977, they performed regularly at the brand new Roxy Club in London, and achieved a cult hit with the Stiff Records single “Wonders of a deal.” Their next release, “Gary Gilmore’s eyesbecame a hit record, resulting in numerous radio and television appearances and considerable media interest! He will present an intimate solo with all the hits at the Talleyrand in May.

Is there a formula for creating an anti-racist school?