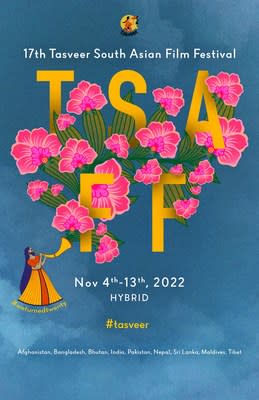 SEATTLE, April 12, 2022 /PRNewswire/ — Tasveer is now accepting applications for the 17th South Asian Film Festival (November 4-13, 2022). Tasveer celebrated its 20th anniversary in 2022 at its 5th annual gala with Kal Penn and Mira Nair. The theme for this 20th year of Tasveer is “The Art of Empowerment”. The deadline for submitting films is June 1st.

TSAFF is programmed through a competitive selection process and Tasveer awards an Emerald Award (recognition for its contribution to South Asian cinema), 3 Audience Awards and a Jury Prize. The winners of the Tasveer Film Fund (supported by Netflix in 2021) will be announced on the closing day of the Festival. Festival film submission forms must be completed online; application fees vary from $20 for $75 and film registrations are due by June 1st. Waivers are available.

The Tasveer South Asian Film Festival is the largest South Asian film festival in United States. Seeking to provide a counterpoint to images and stories prevalent in Bollywood, the festival encourages an atmosphere of thoughtful dialogue and creative inquiry, where filmmakers and audiences engage in lively discussions, forums and other interactive formats. collaborative. In 2021, the festival screened 88 films from 11 countries and welcomed 7,500 spectators over 10 days.

Tasveer invites submission of films on themes related to South Asia and its diaspora as a whole: Afghanistan, Bangladesh, Bhutan, India, Maldives, Nepal, Pakistan, Sri Lanka and the different diasporas around the world. Short films, experimental films, documentaries and stories of any length will be accepted in any digital format. Films focusing on human rights and social justice issues are particularly sought after.

Other questions about the festival and submissions can be directed to [email protected]. Filmmakers can submit films here: https://filmfreeway.com/TSAFF

Founded in 2002, Tasveer is a Seattlenonprofit whose mission is to inspire social change through thought-provoking South Asian film, art and stories.